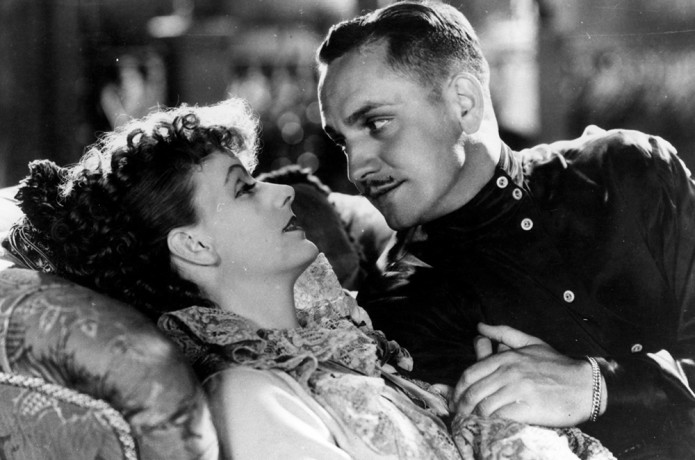 Anna Karenina is an adaptation of Leo Tolstoy’s novel. This is the most applauded of all the versions that have been made of his work, and it is the one in which we meet with Greta Garbo, sublime in her role as adulteress.

The film is a tragedy in which Anna Arkadyevna Karenina, wife of the high official of Saint Petersburg Alexei Alexandrovitch Karenin, falls in disgrace as she dares to break the strict rules of the period by falling in love with Count Vronksy, an Imperial Guard Officer.

Anna decides to break the routine and monotony of a loveless marriage and soon finds herself having to choose between her son, who she adores, and her dashing young lover. She ends up in absolute social marginalization as her husband repudiates her and refuses to grant her a divorce, most importantly so as not to tarnish his impeccable background. Anna becomes the talk of town for all ofMoscow’s society.

This is a story of love, infidelity, jealousy and, above all, hypocrisy. The hypocrisy of a society that keeps its women tied down in marriages of convenience, simply because of what people may say.

Anna ends up alone, abandoned and wrapped up in one of the most miserable situations at finding herself treated so unjustly. It is this desperation that finally leads her to lose the lover for who she had abandoned everything.

In this film, I have met with a magnificent, exceedingly beautiful, elegant and seductive Garbo, particularly superb in her role as resigned wife, charming sister and sister-in-law, inconsolable mother and passionate lover. I think she elaborates all the roles wonderfully and makes us thoroughly understand what the women of that period felt, isolated in a social marginalization that prevented them from living their feelings freely.

There are two scenes that have inspired me: Anna’s arrival at theMoscowtrain station, discovering her serene beauty as she gets off the train shrouded in smoke, and the scene in which she abandons the marital house, after bidding farewell to her son forever whilst enduring her husband’s curses. This scene is, without a doubt, my favourite.

The film reaches and captures our very soul. Anna has to pay too high a price for loving a man that is not her husband, consequently inspiring in us true feelings of warmth and tenderness. One of the ten best films of 1935 according to the National Board of Review.

An award for Greta Garbo as best actress by the New York Film Critics Circle Awards (1935). Founded that same year, it is considered to be one of the most important precursors of the later Film Academy Awards (Oscars). It also gives awards to people and/or organizations that they consider to have made significant contributions to cinematographic art. This includes film critics, restaurateurs, historians and other organizations. Warned that the co-star Frederic March was famous for seducing the actresses with which he worked, Greta Garbo wore garlic beneath her clothes and supposedly also had garlic breath in order to frighten him away.

During the drinking game, the officer opposite Vronksy disappears.

When Anna arrives at Dolly’s room they hold hands with each other; in the next shot they have changed hands.

The way on which Vronksy holds his hat changes whilst he talks to Anna in the garden.

In the horse race, when Vronksy falls off his horse he is seen to be wearing a dark jacket, however, before and after the incident he wears a light coloured jacket.

I leave you here with the film’s original trailer.

Anna Karenina in our “Movie Wednesdays”