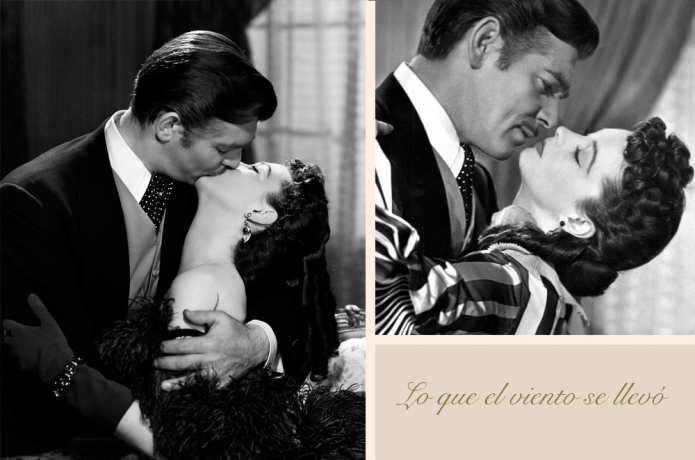 Sitting down on a November afternoon to watch Gone with the Wind, converted a regular day into an unforgettable one. I spent nearly five hours together with my daughter, who I had managed to convince to watch the film with me, hiding the fact that it was nearly five hours long, and who, consequently, didn’t take her eyes off the screen for a split second. It is clear that Clark Gable and Vivien Leigh continue to capture women of all ages and generations.

Gone with the Wind could be classified as “The FILM”, in capital letters. Adventure, love, conflict, suspense, comedy… It has it all. Although David O. Selznick made many other great films, he will always be remembered for this masterpiece.

It contains infinite memorable scenes in nearly five hours of film, which is an awfully long time. My preferred scene is when Scarlett is dressing with Mami, who is tightening her corset. For me, the black maid’s interpretation is one of the columns of success for the film. Not in vain was she the first colored woman to receive an Oscar from the Hollywood Academy, which she highly deserved. The scene when she enters the party when wearing the eye-catching scarlet dress is captivating, and where all the guests are dressed much more modestly, and more caste would be a shameless wink at “Jezebel”.

The meetings between Scarlett, totally distanced from the desperate love and charms of Rett Butler are mixed with love and hate. Clark Gable is impressive and one can never tire of watching him.

The unending, enormous stairs throughout the entire film are marvellous. The almost “Hitchcock-like” scenes (in fact, Selznick asked the suspense master’s advice on a few occasions), are slow with a ticking sound of a clock, where the women impatiently and desperately wait, immersed in an absurd and useless entertainment, for their husbands to gracefully leave the bandit’s assault.

Gone with the Wind will always be one of the most famous films in the history of cinema. Within this film the Golden Era of Hollywood amalgamates, by pure accident, surely. It is a simply unrepeatable film, and an icon for all lovers of classic cinema. I leave you with the film’s trailer and a few memorable scenes: