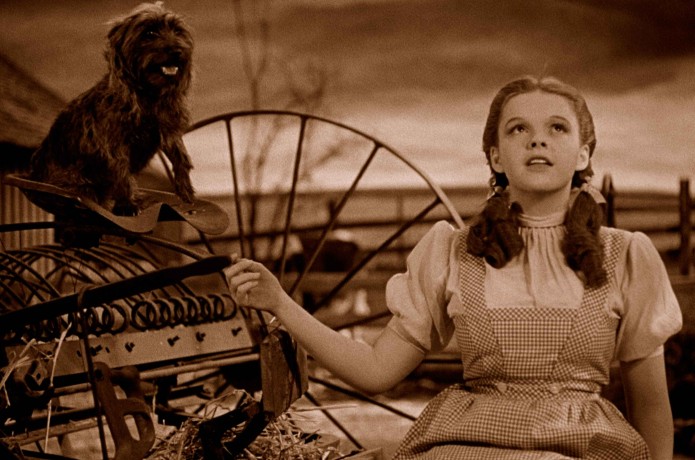 Director: Officially Victor Fleming, although there were more: George Cukor, Mervy Le Roy, Norman Taurog and King Vidor who did the black and white beginning scenes in Kansas.

Frank Morgan (The Wizard of Oz) Although it may not seem true, I remembered very little from this film. I think I saw it at a very young age, and my brother’s tale of what happened to him must have also happened to me; that upon seeing the scenes with the witch in the cinema, he was so scared that he had to leave. I barely remembered some of the scenes, for example even the part with Dorothy’s red shoes or, of course, the famous “Over the Rainbow” song.

Last week I proposed to my daughter of 22 years that we watch this movie together at home one afternoon. I am buying all the “Movie Wednesday” films on Amazon, and this section has provided a perfect excuse for the family to spend some afternoons together enjoying good classic cinema.

I’m getting carried away with something else here, however, why I made the previous comment is because I found it curious that neither my daughter at 22 years or me at 50 could take our eyes off the screen for even a second. We both thoroughly enjoyed Dorothy and her friend’s adventures.

I was impressed by the excellent characterization of the personalities: the Scarecrow, the Tin-man, and the Cowardly Lion. What charming and timeless characters! I’m sure that all children would fall in love with them if they saw this children’s cinema classic today, and of course they would all want a “Toto” at home.

Judy Garland is at her best. Her marvelous voice nearly makes you cry when, right at the start of the film, she sings “Over the Rainbow”.

Due to the use of this warm sepia black and white in the scenes in which Dorothy really lives, and the contrasting color in the fantastical scenes, together with the fantastic special effects in the Emerald City scenes and the music and the simplicity of the story itself, make an immortal children’s cinema classic of “The Wizard of Oz”.

Although referred to as corny by many, one cannot deny the intense emotions of a film thought of for a children’s public. It is film where the adult enters the world of the film with the same eagerness as the smallest of human beings.

Very few times, if ever, has a film thought up for the smallest and youngest, been kept so alive and continues to keep us stuck to our seats.

To those of you with children I propose to you a night of classic cinema with the youngest in your household. I would love for you to then tell me if they were at all frightened, or if the children of this generation don’t get scared as easily as we did. Somwhere over the rainbow: