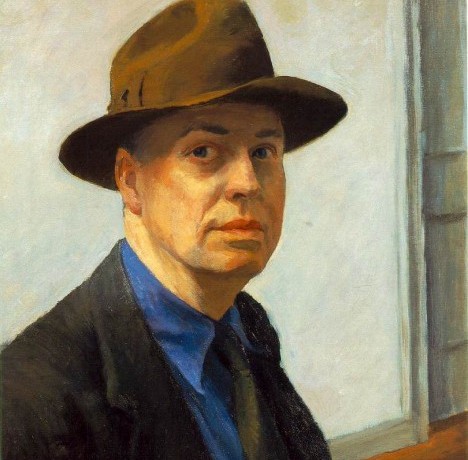 Edward Hopper will be in Madrid until 16th September.

The ‘Thyssen Bornemisza’ Museum hosts this magnificent selection of 73 of the North American artist’s work, creating one of the widest and most ambitious exhibitions that has been shown of his work until now in Europe.

Before going on Holiday I decided to dedicate an afternoon to his exhibition.

I wanted to get more familiar with the work of this Twentieth Century American realist painter, the one about whom I had read so much but seen so little.

I recommend that you visit the exhibition with time; it is rather extensive and surprising. You cannot see it in a hurry.

My first sensation when I started to wander through the halls of the Thyssen was to feel as if I were like one of those tourists with their camera in hand, capturing moments of people’s everyday lives. It’s like walking around the streets of New York and walking into a window display or a window with no curtains at the turn of every corner. You feel like you’re part of the character’s every day life in each painting. Until you reach the point when you start to feel indiscreet and guilty of intruding on foreign lives, trying to figure out what they are doing at that moment, and above all, what would be on the minds of each and every one of them.  It’s as if you’re taking photographs; photographs stolen from everyday scenes and moments of anonymous, solitary, melancholic people’s lives without them even noticing.

It’s as it they were posing for you without realising… without being aware of your presence.

His pieces are of such a simple composition, of such a clean and clear design, of such smooth level and contrasting light that they only leave room for focusing attention on the real main characters and their moment’s of introspection…

There are three paintings that stood out to me more than others, it’s curious because I imagined the three of them converted into photographs. My mind began transforming the characters into brightly coloured pieces of costume jewellery: brooches, earrings, necklaces… Everything transformed itself into solitary people, concentrating on themselves yet under a surprising light just like the one seen in all of Hopper’s paintings.

The first of all is “Soir Blue” Due to its size and strong colours it’s a monumental piece of art. Hopper painted it four years after returning to Paris. I think that in the painting he tries to make a reference to the Parisian society that he knew there. It seems as if the characters were sitting on a terrace, dressed-up and waiting to act in a theatrical performance of some sort.

It includes a clown, a soldier dressed in black tie, what seems to be an intellectual represented by a character with a beard and beret, a Parisian bourgeoisie couple. On foot, leaning against the balustrade is a beautiful, haughty, excessively made-up woman with a skin so white that it shows off her green dress even more so.

I was extremely taken by this work’s colour, strength and theatricality. “Room in New York” (1932). The painting freezes a moment in which the man reading the paper is ignoring the woman’s presence. She is playing a few simple notes on the piano with one hand, absent and thoughtful. The result of this scene is cinematographic, as are so many others of Hopper’s pieces. The woman in the painting is represented by a pair of striking red earrings of a very intense shade of red and the man is absent…as if he were just a black smudge. When I arrived at the “Two Comedians” I imagined Hopper and his wife Jo, represented by two earrings in the shape of tear drops. This works represents the author’s farewell to his public, as it was his last piece of work. The two pierrots (clowns) bow their heads in an act of reverence, sad, as are my two white tears. I also wanted to give a special mention to his watercolours of American houses for their detail and light, which were painted during his summer stays on Cape Cod during his marriage. I have always liked these unfamiliar types of American and English houses… it seems curious that Hopper would have noticed these little fisherman’s houses or the Victorian mansions of the North American East Coast and that he should have painted them in such luxurious detail. It’s charming.

If you are interested in experiencing the sensations produced by Hopper’s painting as you pass by them, do not hesitate to visit the Thyssen Bornemisza before 16th September. I can assure you that the experience is worth it.

In my opinion it isn’t an exhibition that leaves you indifferent… It makes you form a part of it as if you were just another character in one of its paintings.

Virtual visit to the exhibition