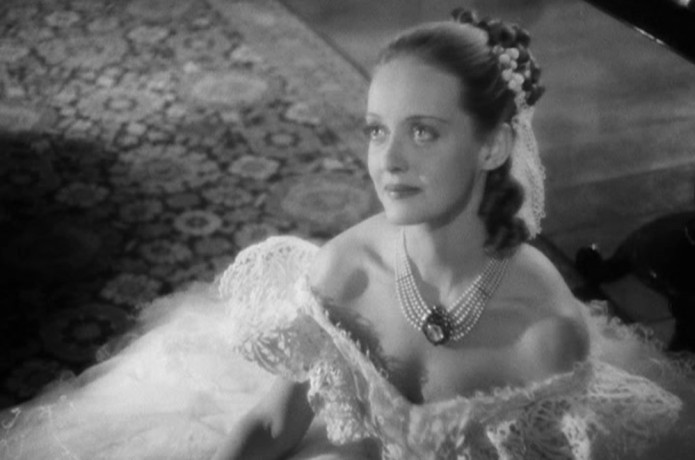 Bette plays the role of an authoritarian, impulsive and capricious mother. Her character is a disobedient young girl who refuses to follow the strict rules of the late nineteenth century Southern American society. Julie is astute, proud, intelligent, but above all she is provocative and manipulative. All this makes her an immature and capricious youngster, who is ready to do anything in order to reach her objectives.

The need to always be the center of attention and to push every situation to its limit is what provokes her fiancé, Preston Dillard, the cold, calculating and workaholic role starred by Henry Fonda, to abandon both her and the city upon not being able to dominate such a tornado of a woman.

There are scenes which brush with perfect interpretation; always, of course, with Davis as the main star.

These are my most memorable scenes:

The dance scene when she decides to attend wearing a red dress instead of the white dress requested by the dress code. The entrances where she takes control of the screen, and brightly and elegantly descends down the staircase are spectacular.

I do not have the words to describe Bette Davis’ face when her ex-lover introduces her to his wife: astonished, cold, desperate, hateful… all these feelings mixed into one and shown in a few seconds on the screen.

Bette Davis’ expression when she’s dressed in white, singing at the foot of a staircase surrounded by children, broken by pain and trying to hide it, is simply unforgettable.

This is not only a story of impossible love in the life of a rebellious and manipulative woman, but also a critique of the archaic strict and almost medieval customs of the time; a time when Julie is despised for dressing inadequately, whilst facing the conventionalisms and not caring for the social rejection that it provokes. All in all, she is a rebellious and brave woman.

Bette is immense on each level. Those enormous dresses framed by a refined bourgeois style convert her into a real Queen of the film, eclipsing everyone who comes beside her. Bette fills every corner of the screen with a sublime interpretation that is worth watching if only to enjoy her gaze. It was one of the 10 Best films of 1938, according to the National board of Review.

Jezebel was awarded by the National Film Preservation in 2009.

A special Award went to William Wyler in the 1938 Venice Festival for his career. There was also a nomination for the Mussolini Cup in the same year. I leave you with a tribute video to Jezebel:

And a trailer for the film: