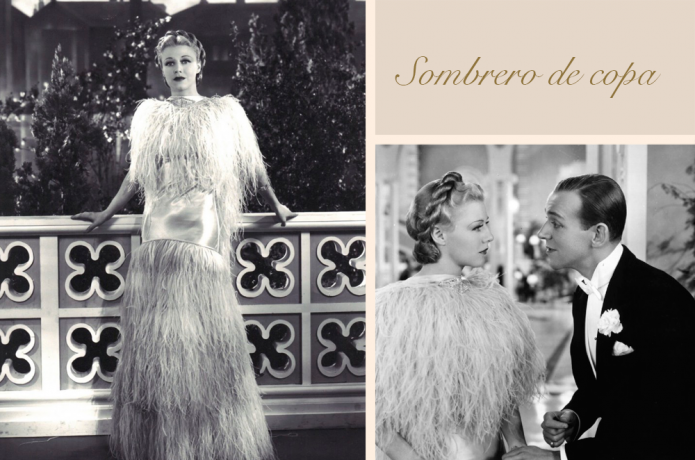 We could not miss out a Fred Astaire film in our “Movie Wednesdays”. Astaire was considered to be the all-time King of Musicals and the best tap dancer in history.

From all the characters in this film, I would choose to highlight Helen Broderick’s role as Magde. I love the elegance and kindness with which she interprets her fun, rich, free, and easy fifty-something year old character. I also adore the good taste and distinction with which she shows off each and every one of the beautiful 1920s models that she wears throughout the film; they are all exquisite.

Although script-wise the film is perhaps a little weak, it is worth seeing for the fantastic dance numbers with the most glamorous, elegant and romantic couples of the Hollywood dance floors: Fred Astaire and Ginger Rogers. The couple literally eats up the whole screen. Unparalleled in style, elegance and class they masterfully interpret the catchy songs that Irving Berlin composed especially for this film. This would be the composer’s first collaboration with the couple, another five were to come later.

However, speaking of “Top Hat” is, above all, to speak of a song and a dress “Cheek to Cheek”, a feathered dress that is already an icon in the history of film. It is a dress so flowing that it seems to take on a life of its own when Ginger Rogers starts to glide over the dance floor.

If you are a fan of dance and good music, I assure you that only to see this dance number is already worth seeing the entire film. For the “Cheek to Cheek” number Ginger Rogers wanted to wear an elaborate blue dress heavily adorned with ostrich feathers. When the director Mark Sandrich and Fred Astaire saw the dress, they thought it would be unpractical for dancing. However, Ginger went through with her wishes and danced in the sophisticated blue dress.

As there was little time for rehearsals Ginger Rogers wore the blue feathered dress for the first time during the filming and, just as Astaire and Sandrich had feared, the feathers became increasingly unstuck from the dress. Later on, Astaire commented that it was similar to a “chicken being attacked by a coyote”. In the film you can see a few feathers falling. This was how Roger’s nickname “Feathers” originated. The feathers episode was hilariously recreated in a scene of “Easter Parade”, in which Fred Astaire danced with a clumsy comical dancer interpreted by Judy Garland.

Fred Astaire and Ginger Rogers danced together five times. This is the film in which they dance together the most.

The two minute dance “The Piccolino” is filmed in only one take.

It was one of the productions that saved the RKO from bankruptcy (another was “King Kong”).

It is the first time that Fred Astaire and Ginger Rogers had a special script for themselves.

The Italian characterization of Erik Rhodes (in the role of Alberto) offended the Italian government so much (Mussolini in particular), that the film was prohibited in Italy. The same had happened the previous year with “The Gay Divorcee”.

The Venice Canal’s stage set was so big that it required two phases of additional sound in the RKO studio. It was 100 meters long. At that moment it was the biggest set that had ever been built.

Fred Astaire wore out thirteen canes throughout the filming sessions. During the filming, he was such a perfectionist and would get so frustrated by his mistakes that he would break them all.

The dress that Ginger Rogers used for the filming of the “Piccolino” scene is exhibited in the Smithsonian’s National Museum of American History, in Washington D.C. I leave you with a link to the museum’s page where you can see the dress. It was quite an effort to track it down, but I finally managed to do so.

And finally, the official trailer:

I hope you enjoy one of the most elegant musicals of the period!

Thank you so much for posting the link to the piccolino dress. Do you know, by chance, what became of the ostrich feather dress from Top Hat? Cheers! Anna

Thanks for reading and commenting, Anna. We’re glad you liked our post! However, I’m afraid we don’t know what happened with this amazing dress. We’ll try to look it up online and let you know. Thanks again!