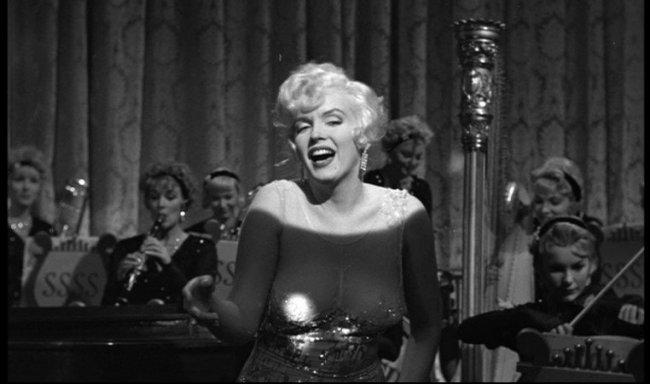 It won one Oscar for Best Costume Design, Black-and-White. In addition, the movie gained many other prizes you can check in the IMDB profile. If a movie is worth of being in the history of cinema as THE COMEDY is this one with no doubt.

Billy Wilder, to me the god of cinema, makes again a master piece where drama doesn’t fit at all.  The only purpose of this film is allow viewers to laugh out loud during the whole tape. Marilyn is sensational, although she already was suffering from all the excesses in her life. She is sexy, swindler and a bit inocent. That way she turns to be the goddess in every scene where she appears.

The moment she appears with Jerry and Joe at the train station right when the steam was coming out (that wasn’t on purpose) is just ingenious, just masterful.

The end is pretty amazingly funny too… Don’t miss a second!

This is possibly the best comedy of all times. A movie that still has the same funny over the years and that will make you spend a really good time.